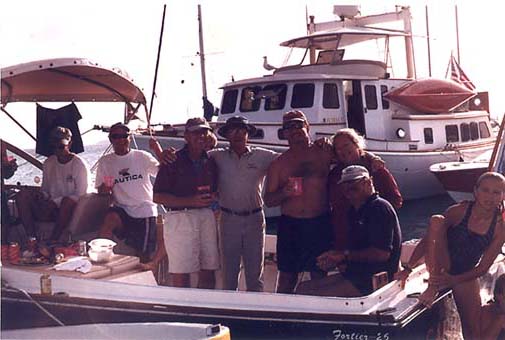 Commodore Richard Avery passed away Friday but his passing must be celebrated not mourned as his was a remarkable and exciting life. The saddest part of his death is that so many recent Yacht Club members did not have the pleasure of meeting Dick and sharing his wonderful stories and personal quirks. He could best be described as a bit “crusty” but his heart was open to all. He was a man to whom monetary things meant little but he lived a rich life. Dick was a true pioneer arriving in VI in the 50’s where he quickly met his Swedish wife of over 65 years, Maryann. He started Avery’s Boathouse inFrenchtown where he virtually invented the Bare Boat Industry. Dick had the wonderfully creative idea to sell Pearson Yachts to his local friends and then help pay for them by chartering them to well established New England Sailors a few weeks a year. A new industry was born and the island had its first fleet of racing yachts. It was never Dick’s interest in getting rich this way but simply wanted to get more folks sailing on his beloved waters.

Dick didn’t have a $1000 to become a charter member of STYC at its inception but he engineered and built the first club house with Rudy Thompson. He raised and rigged the pole that now serves as our distinctive masthead and was the brains and force behind the wonderful awning over the club deck. So much of the STYC history in intertwined through Commodore Avery’s life and his racing yachts mostly called “Joker”.

Dick was a “renaissance man” in very strict terms. He was an inventor, a builder (houses and yachts), a writer (serving as Caribbean Correspondent for Yachting Magazine), a sculpture, loved classical music and a bard / storyteller. His first and only house in St. Thomas was built on 11 telephone poles and he designed the house around all existing rocks that actually appeared in his rooms. When WAPA went out Dick had a 12 volt light system powered by boat battery that lite his home and comfortable but tiny “cocktail pool”. Not to be out down his home in Maine was a literal “shack” on the end of a dock where water was retrieved via a hand pump and garbage went through a hatch in the floor into the sea. The one addition he was most proud of was an actual sauna with water poured on hot rocks he created in a concession to Maryann’s Swedish heritage. To say Dick was unique is quite the understatement.

A man of simple needs, Dick held court every day at the Quarterdeck (now Hook, Line and Sinker) surrounded by a small group of friends and an occasional interloper who was always welcome. Lunch was always a rare “Seacow“ burger and fries always at exactly Noon. His life was simple but full. On his 50th, STYC hosted a Dick Avery look-alike contest with Breton red shorts, navy polo shirts and a scruffy beard was the uniform of the evening. He was always willing to help you out with any marine issue and a bill never followed. He was formal in a nautical manner and loved the tradition that comes from being a true “Yachtman”.

In years to come when folks speak of the great years of Caribbean sailing the stories will focus on the legends I was lucky to know: Joel Byerley, Dr. Robin Tattersall, Don Street, Rudy Thompson and most importantly Commodore Dick Avery. Dick, Rest in Piece there will never be another quite like you.