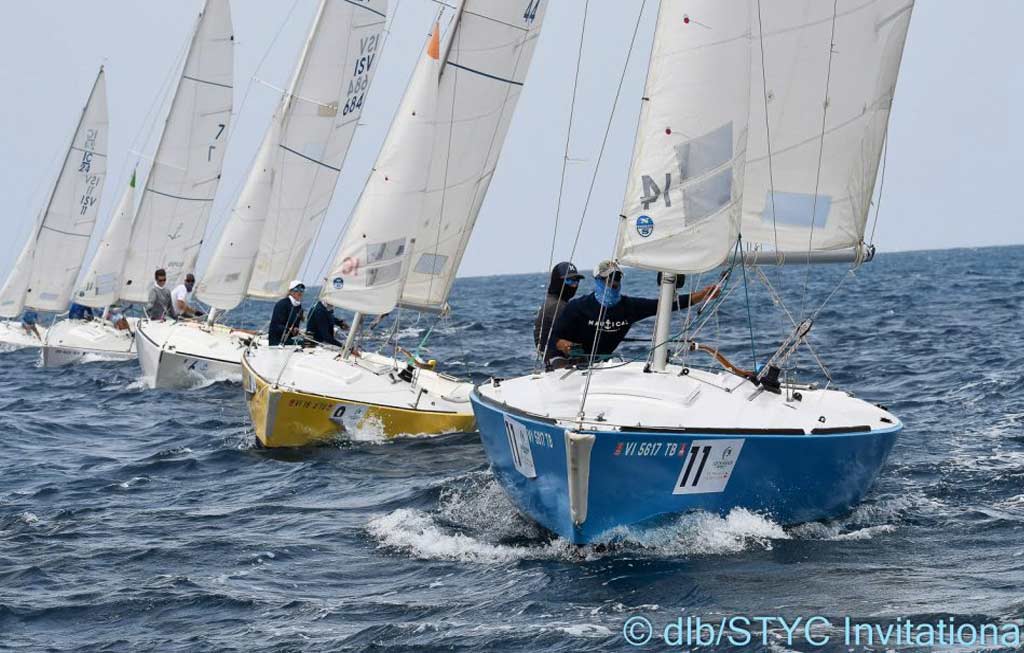 Twenty-one boats with skippers hailing from all three U.S. Virgin Islands, the British Virgin Islands, Puerto Rico, USA and Sweden, completed 10 races total. Conditions, and what gives the U.S. Virgin Islands its reputation as a world-class sailing destination, gave competitors a little bit of everything, from winds gusting over 20 knots to light puffs less than half that speed. These best of both worlds of wind were accompanied by COVID-19 protective measures such socially distanced boats, crew limited to double-handed on IC24s and single-handed on Hobie Waves, and facial buffs or masks in place.

“The Department of Tourism congratulates the winners and all participants in the St. Thomas Yacht Club (STYC) Invitational Regatta. It was especially gratifying to see our local sailors earn some of the top placements. We hope this encourages more Virgin Islanders to become engaged with our magnificent marine resources, which are a defining element of Caribbean life. Marine tourism is a key component of our bread and butter tourism industry and benefits us all,” says Joseph Boschulte, Commissioner of Tourism.

“When we considered how to get back out racing with the pandemic, the decision was made to sail the IC24s with two people instead of the usual five. I asked my son to crew with me as we’re in the same household. He agreed, we started practicing on Friday nights during the series hosted by the St. Thomas Sailing Center (STSC), and little by little we improved. The first day of racing was hard since there was a lot of breeze. Today, the wind was much lighter. Christian tacked the jib perfectly and he called all the headers and lifts. To see him give it his all, in these trying times and for two days, was such a great to experience to have as a father,” says Rosenberg.

After first and second places, scores in the IC24 Class were so close it was anyone’s game. In fact, there were three ties – for third place, fourth place and sixth place.

Scores were almost as equally close in the 8-boat Hobie Wave Class. In fact, it came down to the last race and only two points ultimately separated Compton from the second-place finisher, St. Thomas’ Julian van den Driessche.

“On the first day I capsized twice, but on a positive note, I did have two firsts. I was glad today brought an end to the capsizes with the light breeze. I knew it was close with Julian. He would plant himself to windward of me at the start and use his, I must say, superior speed and pointing to pass by me. The light breeze made it more challenging and I really had to keep the boat moving, the sail loose and breathing, and constantly compare other sailor’s speed and position. I would encourage others to take part in competitive and friendly classes like Hobie Waves and the IC24. While practicing safe health guidelines, the racing really pulled us through the emotionally difficult COVID-19 months,” says Compton.

The STYC Invitational Regatta commemorated a perpetual trophy. This was awarded to the winner of the IC24 and Hobie Wave Classes, Rosenberg and Compton, respectively. This perpetual trophy is dedicated to Rudy Thomson and Dick Avery for their long-standing contributions to STYC and Olympic racing and inspiring sailors of all ages.

The Start of Something Big

One of the biggest take-home messages from this weekend’s event is the high quality of racing, says Tony Coffelt, STYC commodore. “There was tight racing and close scores in both the IC24 and Hobie Wave classes. Add to this the Race Committee offered both round-the-buoy and round-the-island racing. Plus, our ideal Virgin Islands’ conditions offered competitors a range of wind speeds. I think this has been an excellent start to the makings of a world-class regatta.”

The 2020 STYC Invitational Regatta tests the waters for a larger event in future years where teams from yacht clubs throughout the Caribbean, U.S.A, and Europe will be invited to race. Starting in 2021, the STYC Invitational Regatta will move to a permanent date of the third week in May, May 14-16. This time coincides with the wrap-up of the Caribbean race season and creates an extension to the territory’s tourism season, a win-win. In the future, there will be an opportunity for spectators to watch the racing.

The U.S. Virgin Islands Department of Tourism is a strong supporter of the STYC Invitational Regatta, the newest of the events hosted by the St. Thomas Yacht Club, as well as the Club’s St. Thomas International Regatta, International Optimist Regatta, and a match race.
Additionally, the Leatherback Brewing Company and MUTINY Island Vodka, both based on St. Croix, U.S. Virgin Islands, are co-sponsors of the 2020 STYC Invitational Regatta. Leatherback Brewing Company brews and packages craft beer in the Virgin Islands with both traditional and uniquely Caribbean ingredients. MUTINY Island Vodka, the Caribbean’s Original Island Vodka handcrafted from breadfruit, is a first in the world new spirit and created in the USVI.

Sailing is not only a great way to socially distance, but a positive activity for mind and body. The STSC offers several instructional programs for adults, from learning to sail to advanced bareboat certification and cruising classes. Classes are taught by highly experienced instructors aboard the Club’s IC24s. Schedules range from a vacation week format for those who wish to fly in and combine visiting the U.S. Virgin Islands along with sailing instruction, to weekend end and late-afternoon classes for those that live locally and need to schedule around employment.

Class registration comes with a 30-day Bluewater Membership, where students to use and enjoy Club facilities and amenities. A $150 Blue Water Boat Access fee enables students to sail IC24s and Hobie Waves throughout their Blue Water Membership. Students who get hooked on sailing can pursue their passion regularly.